The “Camera Tools” group provides control over common attributes of the 3D Viewer rendering window (i.e. the camera). The background color can be set using the color wheel button

. Depthcueing is a rendering technique in which background color is mixed into the color of displayed objects based on the distance from the person viewing the scene. This fog-like effect enhances 3D perception. By default the Fog color is set to be the same as the background color. Clicking in the chain icon

between the 2 color wheel buttons will break this stop the automatic setting of fog color to the background. Once the link is broken

, the second color while button becomes enabled and can be used to set a fog color that is different from the background color. The picture to the right shows a white background with black fog. 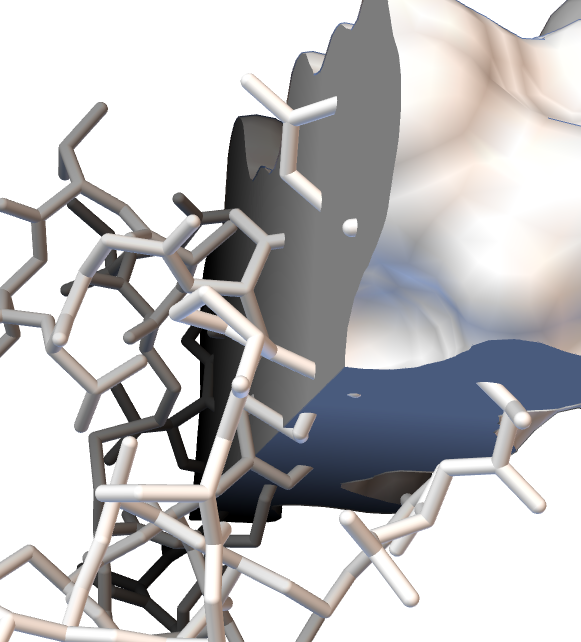 enables setting the level of anti aliasing. Anti aliasing smooth out the edge of lines and polygons and is achieve by redrawing the scene a number of times wile jittering the camera and accumulating pixel values. The higher the number AA number, the smoother the edge of lines and polygons. However, since the AA corresponds to the number of times the scene has to be drawn, rendering can slow down. Modern graphics cards usually support 4xAA in hardware with not noticeable performance penalty.

allow setting the near and far clipping planes which define the start and end of the 3D scene along the viewing axis. The begin and end of the Fog used for depthcueing can be controlled using the Fog thumbwheels

, unless the fog is tied to the Z clipping planes, in which case the fog will automatically adjust to changes in near and far clipping planes. The vertical chain button

to the right of the thumbwheels allows tieing the fog to the Z clipping planes.