Among the various ways molecular fragments can be selected in Pmv, selection strings are one of the most powerful selection mechanisms.

Multiple selection strings can be used when separated by a ‘;’.

Expressions can be strings, sometime numbers or ranges of numbers, or lambda expressions (i.e. a Python function with no name).

An empty string selects everything. For example:

“:::” will select all Atoms in all Residues in all Chains in all Molecules in Pmv

“Mol1::” will select all Residues in all Chains in molecule Mol1

“Mol2:B::” will select all atoms in Chain B in molecule Mol2

A comma-separated list of items can be used in an expression. For instance:

A Range can be specified using the ‘-‘ character.

“1CRN-2PLV” selects all molecules in the list of molecules loaded in Pmv starting at and including 1CRN and ending and including 2PLV. This will only work if 1CRN was loaded before 2PLV. Else an empty is returned.

“::..N*” selects all Residues with the third letter in its name being an N followed by any string

“::…[23].” Selects all Residues with names made of exactly 5 characters and where the 4th character is either 2 or 3

Relative positions in a list can be indicated by using the “#” symbol in front of a number.

Residue selectors usually match the expression against the Residue name, which is a concatenation of the 3-letter Residue type (e.g. ALA, TYR, etc) and the Residue number from the PDB file (e.g. 3, 4A, etc.). One letter amino acid code can also be used (available here). Regular expressions, relative indices, lists, and ranges are supported.

Where to use selection strings:

Selection strings can be used in the select from String command, which is accessible through the select menu. 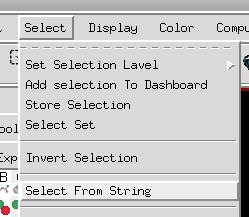 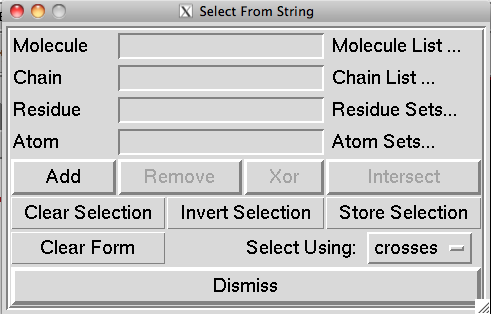 or through the dashboard using the Sel. Entry field: