With CellPAINT, you can create dynamic illustrations of viruses in blood plasma, along with simple human cells. CellPAINT is being developed as part of an effort to model the molecular structure of whole living cells. It will be used in two ways: to allow researchers to sketch out scenes based on their research, which may then be used to guide the construction of detailed 3-D models of the scene, and for use in education and outreach to integrate and present the results of scientific research.

Get started with CellPAINT using the completely-redesigned interface below, with molecular building blocks for coronavirus, blood plasma, and a simple human cell. If you get stuck, take a look at the Tutorial Page. You can also download a stand-alone version from SourceForge.

The program is being developed by Adam Gardner, Ludovic Autin, Arthur Olson and David Goodsell, with support from the US National Institutes of Health. Thanks also to Martina Maritan for scientific support, and Melanie Stegman, Brett Barbaro and other members of the CCSB team for help with testing and usability analysis.

Our first paper describing CellPAINT is available on PubMedCentral PMC6456043.

CellPAINT was originally conceived as a 2D paint program for creating cellular landscapes. The user interface has been completely redesigned in our new release, which has molecular building blocks for coronavirus, blood plasma, and a simple human cell. The alpha version of CellPAINT is also available, with building blocks for a scene exploring HIV biology.

CellPAINT pictures are based on experimental results from many different laboratories. The size and shape of each molecule is based on atomic structures determined by x-ray crystallography, NMR spectroscopy and electron microscopy, and key interactions, such as the embedding of proteins in membranes, are enforced as you create your pictures. The new version also allows you to specify interactions between molecules in a scene.

Inspired by CellPAINT it presents palates of molecular structures that can be selected and interactively placed into a scene. Membrane-bound compartments can be created from isosurfaces of interactively manipulated spherical functions. The 3D molecular models can be placed into open space, inside compartments or on membrane surfaces depending on functional type. Fibrous molecules like DNA and RNA can be interactively drawn in three dimensions. Molecular representation can switch between coarse-grain polyhedral surfaces and full atomic CPK renderings as produced by CellView/CellPACKgpu. Tool functions include painting/placing/spraying, erasing, moving/rotating, pinning, querying/coloring, and creating complexes from multiple molecules. Like CellPAINT one can simulate diffusion using Brownian motion. Navigation within the space, and the creation and manipulation of the objects in the scene are accomplished with two 6 degree of freedom hand controllers. In this sense CellPAINT-VR has morphed from the original painting metaphor into a sculptural or world-building one.

CellPAINT-Exo is our first experiment with importing hand-drawn molecules into CellPAINT. As part of an internship in the lab, Julia Jimenez created a painting of exosomes (small vesicles released by many types of cells). She then created individual images of each of the molecules, and these were added to a custom version of CellPAINT.

We are also using CellPAINT-Exo as our platform for allowing addition of user-defined molecules. This is still in the prototype stage, but you give it a try using a tutorial for using Mesoscope to create new sprites for cellPAINTexo.

Tell us what you think!

CellPAINT is currently in active development, and we are looking for testers. The software still has a few idiosyncracies, so please be prepared to restart the programs if you encounter problems. We are looking for feedback on several general questions:

Were you able to create the scenes that you wanted to make?
Will this type of program be useful in your own work?
Are there any features that you would like to see added?

Please send your impressions to David Goodsell at goodsell@scripps.edu. 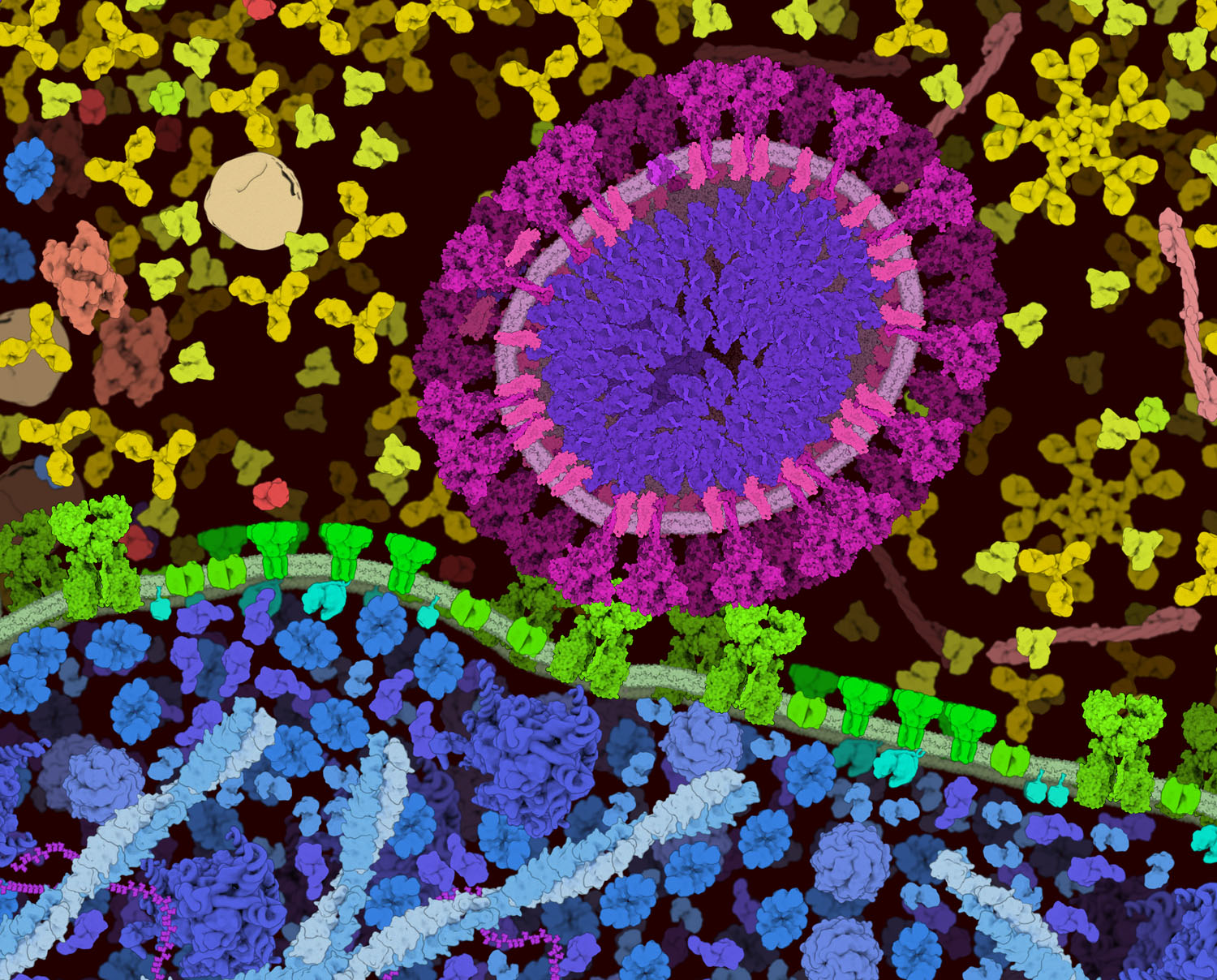