Inspired by CellPAINT it presents palettes of molecular structures that can be selected and interactively placed into a scene. Membrane-bound compartments can be created from isosurfaces of interactively manipulated spherical functions. The 3D molecular models can be placed into open space, inside compartments or on membrane surfaces depending on functional type. Fibrous molecules like DNA and RNA can be interactively drawn in three dimensions. Molecular representation can switch between coarse-grain polyhedral surfaces and full atomic CPK renderings as produced by CellView/CellPACKgpu. Tool functions include painting/placing/spraying, erasing, moving/rotating, pinning, querying/coloring, and creating complexes from multiple molecules. Like CellPAINT one can simulate diffusion using Brownian motion. Navigation within the space, and the creation and manipulation of the objects in the scene are accomplished with two 6 degree of freedom hand controllers. In this sense CellPAINT-VR has morphed from the original painting metaphor into a sculptural or world-building one. 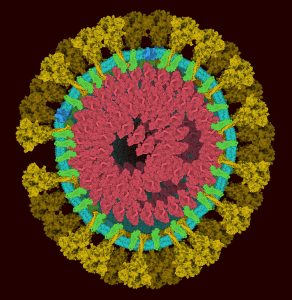