The second edition of “The Machinery of Life” is currently available from Springer. It is also available on Amazon. This edition has full-color illustrations, completely updated to show the most exciting results from genomics and proteomics. This includes a new cross-section of an Escherichia coli cell, shown here on the cover. An updated panorama through a eukaryotic cell is included, starting from the cell membrane and ending in the nucleus, along with views from human cells, such as the myelin sheath shown below. As in the previous edition, the final chapters present topics in health and welfare, and includes a new chapter that covers the topic of life and death at the molecular, cellular and whole organism levels.

I am writing a series of papers in the journal “Biochemistry and Molecular Biology Education” that describe in detail the science behind the illustrations. Here are the ones that are published so far:
A nice editorial by Judy and Don Voet about the series of articles
Neuromuscular Synapse
Escherichia coli
Mitochondrion
Eukaryotic Cell Panorama
Viruses

The project has been supported in part by a grant from the Fondation Scientifique Fourmentin-Guilbert.

3D Molecular Designs has posters of paintings from the book, including a full version of the eukaryotic cell panorama. 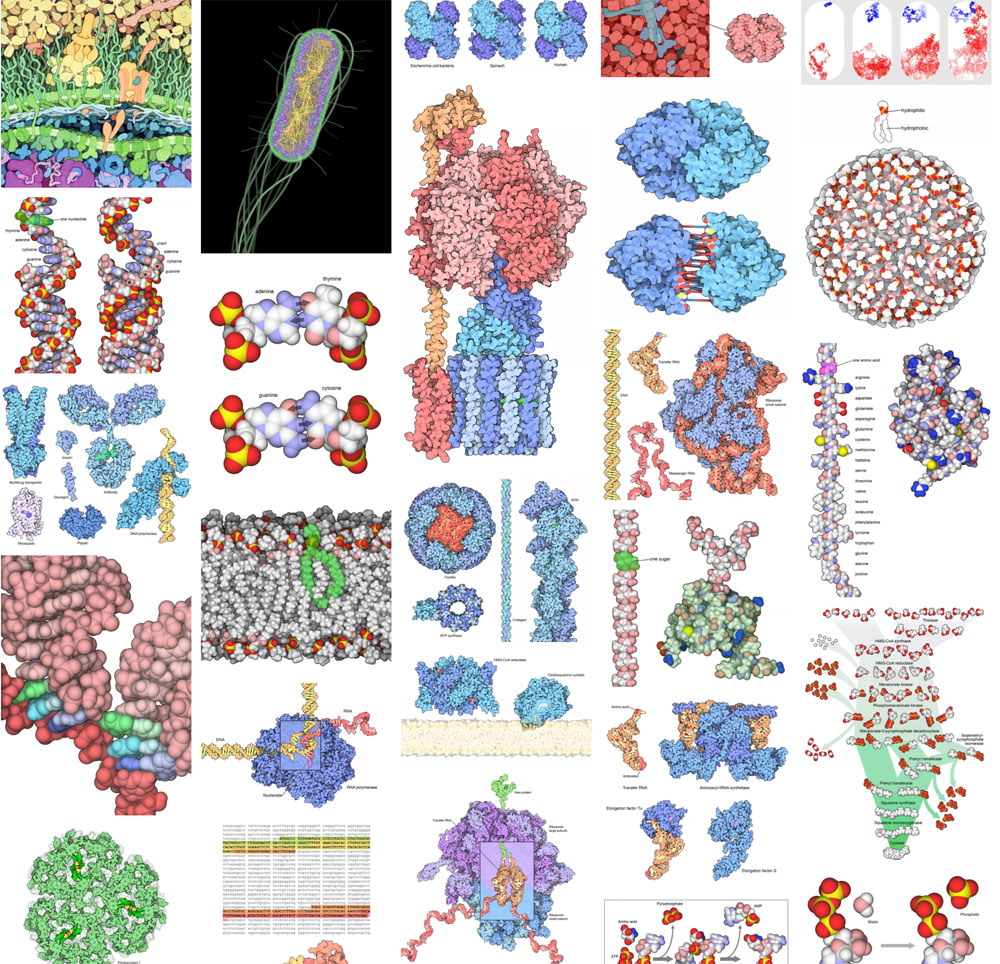 Reduced versions of the figures are available for use in personal presentations.

Careful readers have discovered a number of typos and errors. Click here for a list. If you find others not included on this list, please let me know! 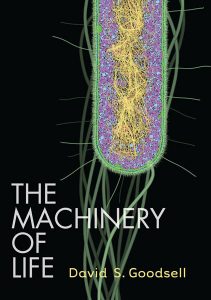 The Machinery of Life, First Edition
David S. Goodsell
With 93 illustrations, 16 in color

Imagine that we had some way to look directly at the molecules in our bodies, perhaps with an x-ray microscope or an Asimov-style shrinking-and-enlarging machine (unfortunately, neither is currently feasible). Think of the wonders we could witness firsthand: antibodies attacking a virus, electrical impulses shooting down nerve fibers, proteins building new strands of DNA. Many of the questions puzzling the current cadre of biochemists would be answered at a glance. But the microscopic world of molecules is separated from our everyday world by an insurmountable, million-fold difference in size.

I created the illustrations in this book to help bridge this gulf and allow us to look at the molecular structure of cells, if not directly, then in an artistic rendition. I have drawn two types of illustrations with this goal in mind: drawings that magnify a small portion of a living cell by one million times, showing the arrangement of molecules inside, and computer-generated pictures showing individual molecules in atomic detail.

I have written the text with the nonscientist reader in mind; I have drawn the illustrations at a level of scientific rigor to satisfy the biochemist. For the lay reader this book is an introduction to biochemistry — a pictorial overview of the molecules that orchestrate the processes of life. For the biochemist, it is my hope that the book will act as a touchstone for intuition. Please use the illustrations, as I have, to help imagine biological molecules in their proper context: packed into living cells. (from the Preface)